My RPG year 2019 part 2: Statistics and insights I

In the following I dive deep into the statistics I made around my gaming in 2019. That is much more than a count of sessions. I compare with the four previous years on what genres I played, with whom I played and many other sometimes surprisingly interesting insights I find in this data. Come with me, have a look at how I played and maybe reflect on your own patterns and how they might have changed over time.

This was supposed to be the second part of three articles on my gaming time in 2019. The first was about events I went to, about my design and community activities. This article is purely on gaming - though some community related thoughts are unavoidable to have when it comes to topics such as diversity at the table, where to recruit players etc. As I tried to put to each statistic one relevant at least going beyond pure data, I decided to split the statistics part into several pieces, published one by one and hopefully making this more digestible.

Let's start with the basics. I played a total of 210 hours in 2019, distributed over 87 sessions. That is less playtime than in any other year since 2015. And still quite a lot. I played with 135 different people which means having had at least one meaningful interaction in play (i.e. in large larps I didn't count everybody in). That is a new record for me since I started tracking. I played 52 different games which were facilitated by 25 different people though a majority of 57% of the sessions, I was the facilitator. These numbers are all well within the same range since 2016. In 2016, I started to explore the Nordic larp scene, since 2017 I play with the Gauntlet. These two communities were the major influence for my gaming and still are.

For this year, I expect to game much less. I have started a new job and my interest in gaming has shifted away from TTRPG a bit it seems. I will hardly drop the 200 hours mark this year. But 200 hours would still mean to play a normal session once per week or more often.

The average session length has never before been that short: just 2.4 hours per session. However, average isn't as significant in this but mainly an indicator how the shorter and longer sessions deviating from the 3-hours gold standard distribute. The shortest sessions are with my older son Milan with whom I mainly play for 30 minutes or even less. The then hours or longer sessions are my old-friends-fantasy-campaign where we play for two or three successive days face to face.

This year, I have a plan about running times: I want to play 1.5 to 2 hours sessions online - being at the ready right at the start and finishing tightly.

The majority of my gaming is happening online. For many years, Google Hangouts Classic was the go-to video call platform for the people I gamed with. This has changed in 2019. Google Hangouts began with a great promise: An open API, i.e. the possibility for everybody to write their own add-ons to the software, made Google Hangouts by far the best free video call software. The Toolbox allowed for overlays. That meant that I could design my own thematic decorations for my characters and that I could visibly track stats as part of my video. The DiceRoller app let me roll right on the screen. 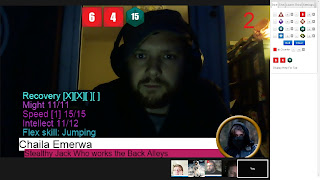 All that ended the latest already in 2018 with Google shutting down this version of Hangouts. Still, Google Hangouts Classic (without apps) was available when the call was started through a Youtube channel. It had the advantage of recording straight to your Youtube channel and in opposite to regular Hangouts had keyboard shortcuts - quite important to quickly mute / unmute yourself. That is now gone, too. Instead we have been using meet.jit.si and Streamyard. meet.jit.si is a free, privacy focused and open source platform. It can record straight to your Youtube channel but at a maximum length of 2 hours. Streamyard has a freemium model with a maximum recording time of 10 hours or so per month in the free version. Finally, who can afford as it's a paid service, uses Zoom. In terms of features, all services have their individual benefits. I mostly use Streamyard at the moment but would prefer meet.jit.si because of the corporate-free nature of the software.

Here is my Youtube channel if you want to take a look at my recorded sessions. 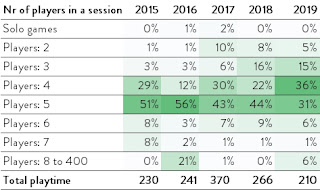 The standard group size I play with is decreasing slowly towards my preferred number of players in GMed games: one GM and three players. Same goes for GMless games - four players is just a decent conversation with sufficient time for everybody to contribute and still have a good web of relationships. Playing more duet games is something I would push for again for myself as I have really enjoyed the intimacy and that everything what is said by somebody in a game is directed 100% towards me. Fortunately, Robert Angus from the Gauntlet has made this list of all duet games currently available on itch.io. That is such a great treasure. He has also made a similar list for solo games. 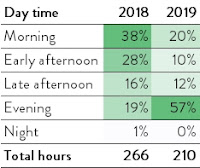 Beginning of 2019 my family moved back from Guatemala, Central America, to Germany. To play in German from Guatemala meant playing in the mornings. I still enjoy morning sessions. But from Germany that would mean to find people in Eastern Asia as most people can only play in the evening. That isn't that easy although a couple of friends live in such time zones and hence the future could bring a regular group together. Playing across time zones has its challenges. I think some games really benefit from people a) having the same energy level and b) from sharing a "day time mood". Sure, to simulate night, you can close your windows and get all light out. But at least for me, that is not the same as playing at the end of the day when all life around you is coming to rest.

For my statistics I also track how well the technical set-up of my games went. For online games that usually means: internet connection. For f2f games that can mean that essential material was missing or not working in case something goes wrong. One could think that returning to Germany would have improved my internet connection compared to Guatemala. In the beginning though it didn't. That was because of was relying on Wifi and I shouldn't have. Now I have a connection through cable to my router and everything goes smooth. People, don't play via Wifi. At least not in densely populated areas with lots of interference and many devices connected.

Moving back to Germany meant one significant loss for my gaming: the US evening games on the Gauntlet Calendar weren't accessible to me anymore. Playing with Lowell Francis, Jason Cordova and Rich Rogers frequently was such a pleasure. There still is Rich Roger's Star Wars Saturday morning (i.e. my afternoon) and other opportunities to play with them. But that and personal changes like new daily routines have shifted my gaming towards playing more in German. The conventions I went to in 2019 were also 80% in German language.

Before I will close this article, let me talk a bit more about with whom I played and especially about diversity at the table. This statistic needs a more careful interpretation since it's based a lot on assumption I made and biased through my personal perception. It also smells like tokenization. But I would say it is worth putting it out here and leave it to the reader how much this is problematic and / or relevant. I'm ready to listen. The bottom line for my gaming table is: in most of my games I'm dominantly surrounded by people like me: white, middle-aged, cis-men. And this hasn't become better in 2019 compared to 2018. I played with more women and that is mostly because of larp events I went to. I played less with queer folks as the German scene I interact with since my move back to Germany is less queer than the North American scene I found players in the year before. Is my table not welcoming enough for more diverse folks? Do I have a bias towards playing games not inviting in diverse people? What systemic factors are in play I seem not to fight back against strongly enough? That my play will probably concentrate a lot on my long standing high school friends f2f group which is only white cis male won't improve the statistic for 2020.

[I should mention that I count myself in, in these numbers, i.e. in a two-player game there could only be 50% rate of non-cis-men.]

Every new person, no matter how experienced they are, if they are into OSR, Trad, Indie, Boffer Larp or Nordic Larp or fresh to roleplaying, brought new perspectives into my life and gave me a chance to learn and grow. Most of these new people I met at conventions. But the Gauntlet still was the second biggest source of new people. It's a fascinating community and whenever I play elsewhere, I see how much I appreciate the playing culture nurtured on the Gauntlet.