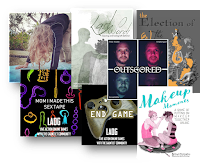 Live action is for everybody. Larping online makes larping accesible to a completely new audience, makes it much easier for people with kids, financial,  mental or physical constraints and allows for a truly global audience at a minimum of environmental costs.

It's time to list all the existing games (of my knowledge) and where to find them. [EDIT: So many larps have been transitioned to be played online due to the Corono-crisis, I can't list them all but will focus on those with interesting design choices specifically for online play.]


What are we talking about

First of all, the basics what we talk about. A LAOG - a Live Action Online Game - is a live action game to be played online.

But be aware of the golden rule of game design frameworks:

Break any of these fundamentals: it’s even more so a LAOG
LAOGs bring with them


Playing online means:
The full manifesto with all details you look for, some further explanation on each of the above points etc can be found on NordicLarp.org.

For more thoughts on what design challenges and opportunities in LAOG design, check out this article on my blog.

Game examples and where to get them

In the following, I list a couple of LAOGs, give a short description, if available a screenshot of game play, and what I think the game brought to the design framework.


So Mom, I made this sex tape

Women of a family of different generations of feminists come together to discuss how to proceed with the leaked sex tape of the daughter.


Watch an actual play here:
So Mom, I made this sex tape (Gauntlet community) 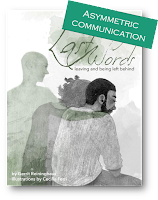 An unfortunate death separates two people who still have unresolved business. An angel tries to bring peace to the deceased by entering the living‘s dreams.
Asymmetric communication through separate voice call 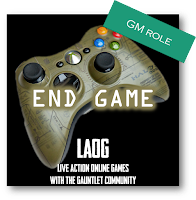 [by David Hertz from Glass Free Games, LAOG re-design by Gerrit Reininghaus]
A professional eSport-team let sink in that they lost their position in the commercial league.

Watch an actual play here:
End Game (Gauntlet community) (be reminded that this was run in two video rooms. Find the link to the second room in the shownotes and watch it in parallel to get the full blast)

Four magical entities, the Forest, the Winds, the Faerie and the Animals, need to come to a conclusion although they speak very different languages.

Where to get the game:
The game is currently only available in German. 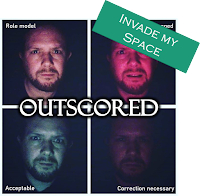 [by Gerrit Reininghaus; Golden Cobra Winner 2019]
In a dystopian near-future friends with a shared passion want to go to university. But a high social credit score is obligatory.

The Election of the Wine Queen 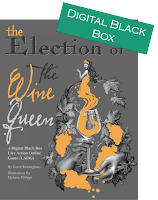 The Election of the Wine Queen (Gauntlet community, German)

The Election of the Wine Queen (Gauntlet community) 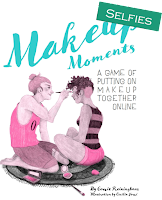 [by Gerrit Reininghaus]
Celebrating the moments of putting on makeup together before an important event.
Where to get the game: 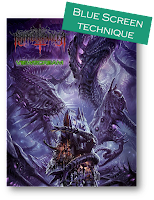 [by Rafael Chandler]
Officers in different areas of a crashing space ship need help from each other to survive.
ViewScream was the very first LAOG.

Where to get the game:
You can buy ViewScream 2nd edition on DriveThruRPG.

Watch an actual play here:
One of the many actual plays on Youtube is this here. 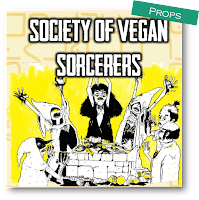 [by Wendy Gorman]
A recently turned vegan group of expert sorcerers come together to find vegan substitutes for their bloody rituals.
Where to get the game:
The game can be found in Gauntlet Codex Yellow on DriveThruRPG. 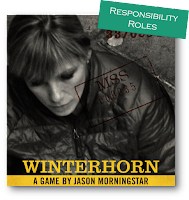 [by Jason Morningstar, LAOG adaption by Gerrit Reininghaus]
A group of secret service officials meet formally with the task to destroy a political activist group.


Where to get the game:
Watch an actual play here:
Winterhorn (Gauntlet community)

[by Banana Chan]
The lizard men conspiracy is uncovered by us and we do daily video diaries to document our investigations.

Where to get the game:
Watch an actual play here:
They're Onto Me video diary by Tobi Abad 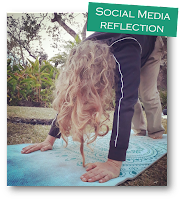 Where to get the game:
Find it on itch.io

Watch an actual play here:
My private Instagram (@gerlusar) shows some impressions. Some more can be found publicly under the Instagram hashtag #instayogathegame

[by Tara Clapper]
Between cryo-sleep on a space ship, the crew has to make important decisions about what society they want.

Look out for runs of the game on geekinitiative or Tara's Facebook Page.

Tara has several other professional games and more in development you shouldn't miss out. 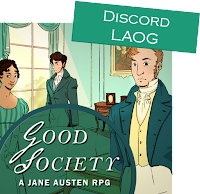 [by storybrewers, Vee Hendro and Hayley Gordon]
Good Society is a collaborative roleplaying game that seeks to capture the heart, and the countenance, of Jane Austen’s work. You can buy the larp version individually. The larp version contains rules for online play over a Discord server through several voice / video channels working as separate rooms.

Where to get the game:
The larp version of the mainly sold as a freeform tabletop RPG can be found on the storybrewer's website. It contains the rules for online play.

You’re a character in a reality TV show (think The Real World or Big Brother). You live in public with a bunch of other narcissists, sharing a house and daily rituals together.

Where to get the game:
Different rules versions can be found on http://thehousethegame.blogspot.com/.

Watch an actual play here:
There is a whole Youtube playlist with video snippets which were part of different runs of the game.

[by Tara M. Clapper]
In this 2-6 player digital larp, characters discover their ties to each other after previously subjecting themselves to memory wipes. This emotional larp relies heavily on blackbox techniques converted for digital larp use.

Where to get the game:
The game is available as a free download on the Golden Cobra Challenge website.

As We Know It

[by Aven Elia]
A game about hiding out from an alien invasion. You've been bunkered down in this space for a while and you're trying to find others through text messages.

Where to get the game:
The game can be found in the Golden Cobra Challenge game collection of 2015.

[by Jeff Dieterle]
The GM is a radio host and is accepting callers. As the calls come in, the host realizes that there's an apocalypse headed their way. 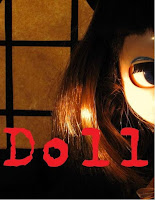 [by Josh Jordan]
Doll is a supposed to be a storytelling game for two but can be perfectly played as a LAOG, i.e. without leaving character at all.
One person plays a child whose pet has just died. The other person plays the child's doll, puppet, or other toy. The doll knows everything that goes on in the house, but it does not always tell the truth. During the game the child will try to find out the truth about their parents from their unreliable doll.

Where to get the game:
Find the game on DriveThruRPG for $4. 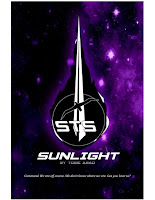 [by Tobie Abad]
Space travelers are sent out on a light beam technology. But something has gone wrong. You are command and must safe everybody.
Where to get the game:

The Space Between Us 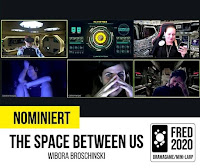 Requires exactly five players and one gamemaster, and lasts about 5 hours including workshops and debrief. There are prewritten characters and secret roles. This larp focuses on the relationships between the members of the family, and how they will affect the characters on their mission. And there will be some space adventure!
Where to get the game:
Find the game on itch.io: The Space Between Us

The Golden Cobra is an annual award for print & play larps. The Golden Cobra had LAOG as a category in 2019. Find a few games hence from there (including my winning LAOG Outscored. 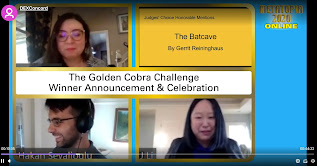 In 2020, the Golden Cobra turned all LAOG and epistolary (journaling). That means, their archive from this pandemic-year is a treasure of innovative games. Look through all of them or just the winners. My game The Batcave received an Honourable Mention.

LAOGs are on the rise. Live Action is for everybody. So, go ahead, design your own LAOG. If you give me a link and a short description, I will happily include your game in this list. Get in touch with me on Twitter @greininghaus or wherever else you can find me.
Posted by Gerrit Reininghaus