This is how my RPG and LAOG / larp life looked like in the last years - in numbers. Follow me on a statistical ride, based on the form I'm using to track information about the sessions I played. Since I missed posting about the stats for 2020, this is looking back at two years. More so, since I'm now doing stats since 2015, I have now 7 years I can compare with each other. Sounds like a decent time series, doesn't it?

Surprise, surprise, my gaming moved online over the pandemic. Also, I played a lot less. From the all-time-high in 2017 with 370 hours of gaming, I'm down to 130 hours in 2021. That still sounds like enough to me. The stats nicely show that pandemic times weren't a drastic shift in gaming. Quite the opposite, my gaming has been mainly online since 2017 - when we had moved to Guatemala.  I'm a fan of playing online: the variety of people I can play with, the setup, the commitment to logistics.

All the following figures are percentages in gaming hours - not counted in sessions. Which means that longer sessions have a higher weight. That seems to me to be the more useful stat as more time usually also means higher importance and hopefully more joy.

Let's get into some key data. Two-third of my gaming time, I facilitated the game, which mainly means traditional GMing but also facilitation but then playing as everybody else. The number of sessions has gone down last year to 35 which is even lower than the time in 2016 where we moved continents. But given the drop of play time, it is nice to see that online conventions still expose me to a great number of people to play with. Most people I played with, I had never gamed before with.

What systems did I play? When it comes to TTRPG, it is all about PbtA again. That is due to me nearly only playing TTRPG in my home group (which moved online). We play the Dark Eye campaign Sieben Gezeichnete there and are now officially in part seven of seven - after 7 years of playing. The campaign is amazing. It is the second time I run it but last time was in teenage years and we gave up in part 6 of 7. Now we have played 260 hours in it and I can't wait to add another ~50 hours before the final words will have been spoken.

The other half of my gaming time is LAOGs - live-action online games. LAOGs are soul food for me. There is so much exploration, so much in the unknown and open to exploration in this framework - I'm so happy that I was able to contribute a bit initially to the genre and now see it flourish everywhere.

The next table is showing number of players per session - that included the facilitator(s), i.e. four players means 1 GM and three players has become most common for me - with me the GM. I played one solo session in 2020 - that was a session of Makeup Moments which you can still find on YouTube. But otherwise, there were no solo games for me anymore in the mix. I started another later in the same year but gave up after life took over.

The one stat I don't present in hours but percentage of sessions is the one about session length. The interesting observation there is that the Gauntlet's standard length of 3 hour sessions has disappeared from my gaming schedule after a long time it being the dominant format. Currently, 3 hours is just too long for the short free evening I have - working until late, then getting the kids to bed and starting rather early next morning. In 2019 / 2020, I had two beautiful 1:1 series running, with Julian Kluge I played Desert, with Ary Ramsey I played Lost Roads, in a two-hour-format. That worked very nicely. But even two hours seems too much of a commitment to me right now. Instead, I book a whole day for online conventions or my home group. every other month.

How happy was I with my gaming? Quite happy I would say. A majority of my sessions I considered great when reflecting on them right after play. My play time seems not to be as fantastic anymore as in 2017 -  but these were special times where I was hit with total excitement about the Gauntlet's play culture. Instead, the mediocre sessions are those where I signed up for games at conventions which didn't turn out to be what I wanted from them. Convention setups are less controllable and that is fine. My curiosity and openness was still justified and gratified with lots of learnings and seeing interesting games even if they were not exactly mine.

While the table above looks at my satisfaction with the play time itself, the next table looks analytically at the system beneath the game. The pattern is the same though - which speaks for the fact that good systems make good gaming time.

Rating sessions itself, ends with looking at the technical setup. This applies for both online and physical sessions: is the place where we play working well for the game we intend to play? This obviously is especially relevant for online sessions where technical issues are less easy to control for. The year 2021 saw a rise in problematic tech setups. That is again a fact of convention play where it frequently happens that less experienced players learn about flaws in their setup only when the game has started. There also were some games, where the ambition what to achieve with tools online was a bit stronger than the capability of the tools when put into action.

I also track what kind of intensity was reached in each session. The stat is a bit flawed as one intense moment doesn't make a 12 hours session intense. But doing the same stat on nr of sessions would also take away weight from those 12 hours sessions with many of intense moments. Let's take it as it is. Most sessions I consider to have intense moments in them. No session left my completely untouched. And last year, a third of my gaming time had moments of highest intensity in them. That can mean anything, from dramatic decision moments to cheerful celebration up to deepest sorrow at the table.

I have two stats on diversity. The more relevant is the one about diversity at the table. In many cases, I had to make assumptions about how people would self-describe them. I'm sorry for everybody I labeled wrongly. However, this is an aggregate stat and for increasing my own awareness about diversity at my gaming tables. It does not look good. Non-white folks still are highly under-represented which is a shame. The biggest impact here obviously has my home group which consists of - guess what - 4 middle-aged high education middle class white straight cis-guys who know each other since high school. My LAOG gaming though was interestingly dominated by non-cis-men. Also when I look at designers and organisers in the LAOG space, I get the impression that it is a field with more diversity than what I see in TTRPG (also more diverse than Indie TTRPG).

The less important stat about diversity is about the characters I portrayed and their gender conformity. Admittedly, that stat was more difficult to interpret last year, as I played in many games in which the character's gender stayed undefined. For example, in my LAOG The Batcave I establish that the bats you play don't address each other by gender and all have they/them as pronouns. In other games, like Radio Silence, one of my stables in the last two years, the gender remains irrelevant. But from the 2021 statistics there is one observation I can make: in larps and LAOGs with actual characters, I don't seem to play women. My physical masculine presence is it which makes me hesitate. In TTRPGs I don't have such a barrier. I should continue reflecting on this.

Since 2018, I also capture how much violence (of any kind: verbal, physical, societal etc) is present in my gaming sessions. A third of the play time I have, is rather violence free since 2020. I carefully looked for games to cheer me up instead of tearing me down. But especially my PbtA fantasy campaign is a lot about fighting and hence violence is "in the game" for me.

Talking about fantasy TTRPG: fantasy as a setting is high up in the ranks at the moment due to the Sieben Gezeichneten campaign. But look at that: sci-fi is creeping up to all-time-highs. That came as a surprise to me but then I remembered that many LAOG designers consider sci-fi an easy alley to incorporate technology into their online games. It easily feels more natural. I insist on that one should not limit oneself to tech settings in LAOGs. But I can see the point.

Alongside the setting analysis, I track something I call "Tone". Any combination of setting and tone is in theory possible. But in the last two years, the combinations most prominent were "fantasy adventure" and "sci-fi drama".

That is all I want to say about stats this year. Which brings me to the possibly most interesting list in this: what games did you actually play in 2020 and 2021? 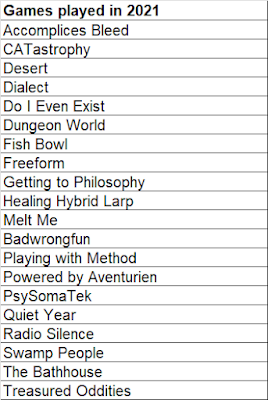