Ghost Drums - a game about pain and ignorance 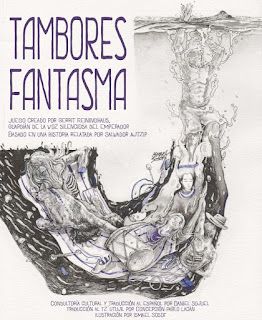 Ghost Drums is a a short story game by Daniel Sojuel and me with art by Ismael Sosof. You can find it in the latest Gauntlet Codex issue, Dark 2. To buy a Codex issue you need to join the Patreon for the respective month (December) on the $4 pledge level. It will later next year be available on DriveThruRPG, too.


With Codex Dark 2 you'll get the game twice: once in English and once in Spanish.

The game is based on an old Tz'utujil Mayan legend. The legend is also included in Tz'utujil.

Ghosts who drown in lake Atitlan (Guatemala) return to the town of Santiago Atitlan (where I currently live) to haunt the living. But they are forced to carry drums, so the living can escape them. One day a visitor from the North comes and steals the drums as they make nice souvenirs.

I would like to present the collaborators working on this game together. 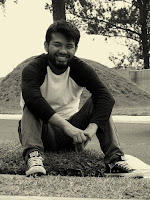 Daniel Sojuel is a psychologist from Lago Atitlan, from where the tale is. He consulted the game culturally and made the translation into Spanish. Daniel has worked on trauma from theGuatemalan civil war in Tz'utujil territory. He has also playtested my other game Atitlan Riders with me.

Ismael Sosof is from Santiago Atitlan as well and works as an artist. He has made the cover art you can see above. You can hire him for you own publications. This is a logo he and his partner Marien Acú have made for the gaming retreat Tres Volcanes I organize here in Santiago. 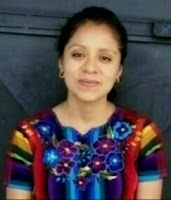 Concepción Pablo Lacán has done some consultation for the game and translated it (back) into Tz'utujil. She is a teacher and has just represented her school in North Carolina. She teaches Tz'utujil to my son. This Mayan language is still first language of ~100,000 people and 90% of the population of Santiago Atitlan. 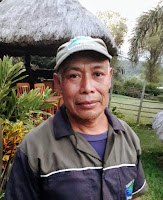 Salvador Ajtzip has told me the tale first. He is 59 and works as a gardener. He has also worked for the Catholic church and is a profound massage therapist. The ghost drums as he described them were used in the past by the mayor to make public announcements. That might be why people associate them with scary ghosts to run away from. 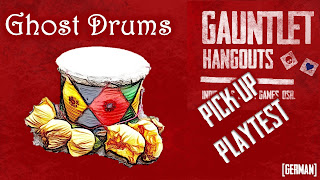 The game is very ritualistic and meditative. As a ghost player you need something to drum on. The visitor makes you silent by taking the drum away. Which makes you dangerous. Now the living can't hear you coming. This was a playtest (in German):
https://youtu.be/YI0MqQInxrc